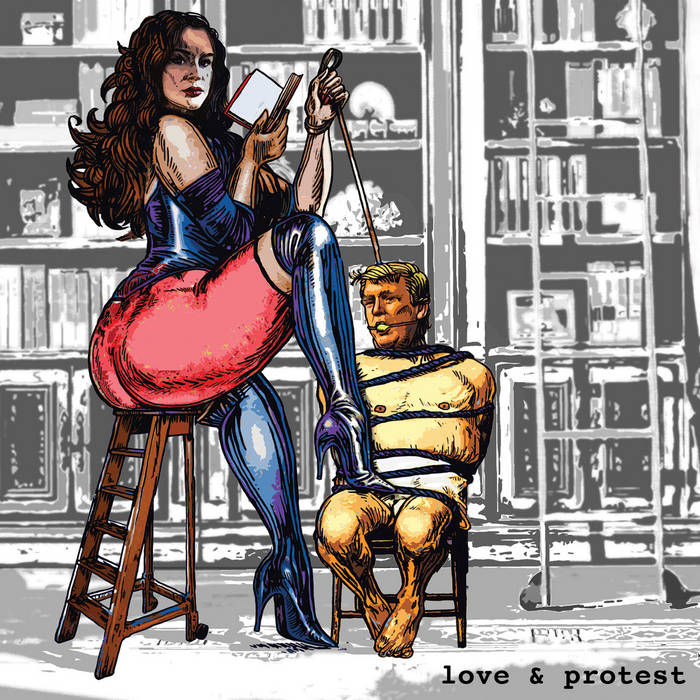 London-based vocalist-composer Alya Al-Sultani has been nothing if not ambitious in her musical development to date, and her latest project Collective X is no exception. Formed in the aftermath of the bitterly divisive 2016 European Union referendum, this is a highly experimental supergroup that brings together several of Britain and Europe’s most adventurous musicians. On its debut Love And Protest the band delivers a strong socio-political and cultural message framed by a compelling tapestry woven of avant-garde jazz, blues, electric funk and acoustic roots music.

Born in Basra, southern Iraq and raised in Tottenham, north London, Al-Sultani released Chai Party in 2015 to explore her Middle Eastern heritage as creatively as possible but this new project has a distinct objective. “For me Collective X is where I use jazz more as method, as aesthetically I’ve moved away from the American songbook,” she explains. “I love funk and breakbeats, contemporary jazz and free improvisation and hip-hop. I wanted that all to come together, not in a forced way… just through open-minded musicians, and by giving them a basic structure. I wrote the songs but it was collaborative in rehearsals, which led to a single day of live takes.”

Produced by vibraphonist-multi-instrumentalist Orphy Robinson Love And Protest is set to be one of the most intriguing releases of 2018 for both the elusive, indefinable character of the music as well as the premium quality of the band. Assembled from what was Al-Sultani’s wish list of cutting edge musicians on both the jazz and avant-garde scenes in London and Europe the group features the likes of vocalist Cleveland Watkiss [“The perfect foil for my voice but we also have very contrasting improvisational styles”], bassist Neil Charles [“I’ve always rated him, and he also has an alter ego as a producer, his landscape is broad”], drummer Mark Sanders [“Although he’s a free player he holds a very good groove”], and pianist-keyboardist Pat Thomas [“What he hears in the music I don’t think anybody else hears.”]

They are joined by poet Joshua Idehen, guitarist Dave Ital, and two of Al-Sultani’s other regular collaborators, pianist Clements Christian Potzsch and saxophonist Robert Menzel, who both hail from Germany. This international gathering of musicians fully embraces the conceptual verve of Al-Sultani, who wrote thought-provoking lyrics on the lived reality of a contemporary British-Arab woman, as well as her spontaneous approach to improvisation and arrangement. Together the musicians create an ensemble sound where myriad harmonic layers and rhythmic tangents spin off a strong compositional core. Al-Sultani hears the group as ‘something quite dense’ but individual voices still pierce through due to both the attention to detail and advanced synergy that has flourished between the players.

True to Al-Sultani’s mindset the music is not restrained in any way, and defies any lazy categorization. All of which resonates powerfully with the stories Al-Sultani is telling. She indeed broaches a wide range of identity politics, from fetishization of the black body to honor killings to sisterhood, in an entirely liberated way. “I struggle with labels and but I also feel they’re important,” says Al-Sultani. “I think it can encourage the idea of a monolith or homogenous group yet it’s important because in some ways people like me smash stereotypes; it’s a very fluid identity we have. I certainly am a Londoner, I am Iraqi, I am Muslim in my own definition, which is problematic for some people. I guess the artistic journey has been parallel to that of trying to understand who I am. Well, I’m not here to give people what they expect.”